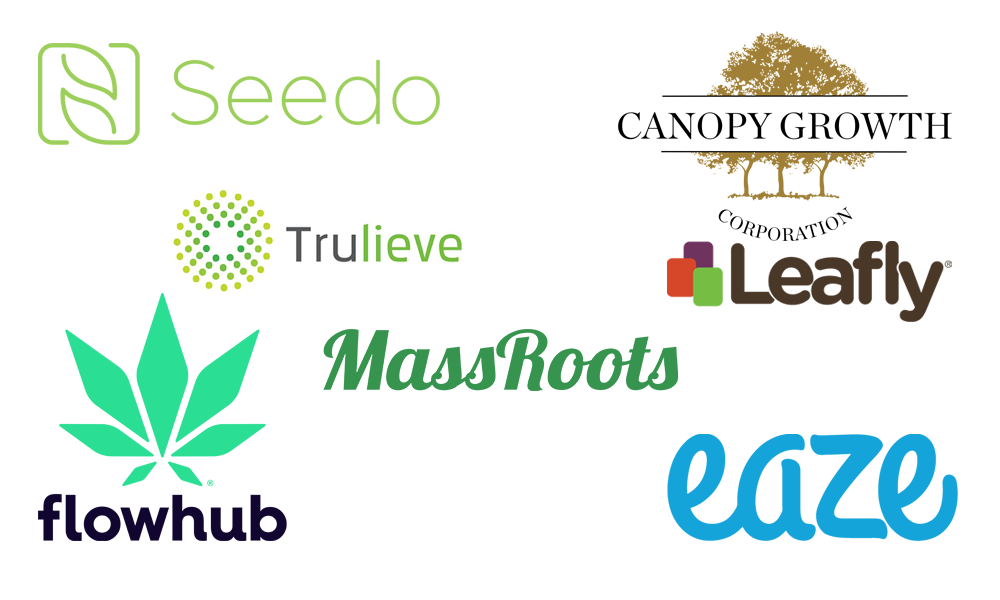 Marijuana is now legal in 11 United States localities, the whole of Canada, and many other parts of the world. There’s a growing body of research to support the positive medical benefits of marijuana, and recreational use is becoming more and more acceptable.

Some marijuana businesses became big even before legalization became widespread, but the growing legalization has only made the industry bigger. In fact, market research suggests the legal marijuana market will be worth $66.3 billion by 2025. It’s an ideal time for any aspiring cannabis entrepreneur to get involved.

With major marijuana corporations, dispensaries with new ideas, and marijuana tech companies supporting the growth of the industry, you might want to look at some of the most innovative marijuana businesses for inspiration.

Here are 11 innovative marijuana businesses to check out.

Canopy Growth Corp was founded as Tweed Marijuana Inc. back in 2013 by entrepreneurs Bruce Linton and Chuck Rifici. It became Canopy Growth Corporation in 2015 and soon became the first North American marijuana business to be federally regulated, licensed, and publicly traded. It even got the stock name WEED on the Toronto Stock Exchange.

It’s now one of the biggest businesses in the entire industry, with many people closely following the value of its stock. It’s blown up in the past year, especially as marijuana became legal in Canada. It also has international operations in Spain, Germany, Denmark, Jamaica, Chile, and Brazil, and the company plans to expand its reach even further across the world. 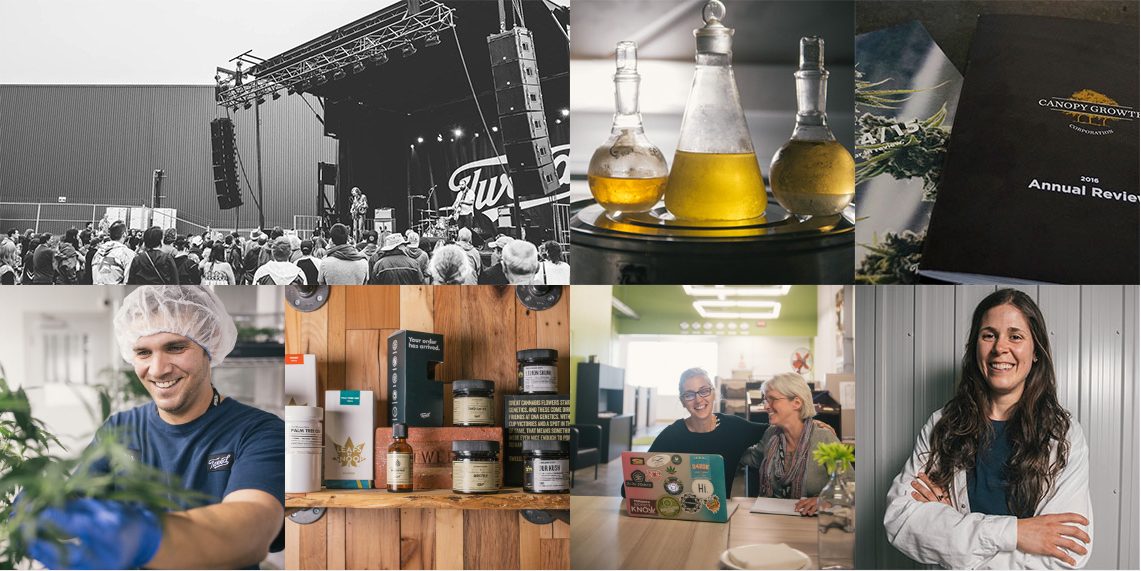 One of its biggest innovations was through its partnership with Constellation Brands. The company behind brands such as Corona, Modelo, and various other beers, wines, and spirits made a $3.8 billion USD investment in Canopy in 2018.

The companies now plan to work on cannabis-infused beverages.

Leafly is a name that every marijuana enthusiast across the world should be aware of.

It was initially founded in 2010 but became even bigger as medical marijuana became legal in 2014 and an ad for Leafly was published in the New York Times. It’s now the biggest cannabis portal on the internet with over 15 million monthly visitors checking in for information on every possible cannabis strain and product.

The website is well-known for providing information on all kinds of indica, sativa, and hybrid strains. Marijuana users can quickly check on Leafly to see the kind of effects, benefits, and drawbacks each strain provides. The website also provides a range of comprehensive information on nearby dispensaries, how to grow your own marijuana and practically anything else related to marijuana.

It’s now in its ninth year of operations and only gets bigger as cannabis becomes more popular for consumers. Chances are, many of the strains and products you search will bring you to Leafly.

It’s one of the most innovative marijuana businesses and one of the first to cater to cannabis enthusiasts.

Weedmaps is another one of the most used and most popular websites for cannabis users. It launched all the way back in 2008, and by 2009 it was picking up positive media attention. It’s similar to Leafly in the sense that users are able to review different strains and products. However, its real niche comes in how easy people are able to find dispensaries close to them.

As the name suggests, Weedmap provides locations for dispensaries all over the United States, Canada, and anywhere else where cannabis is legal. Users can do a quick search to find dispensaries, look at their menus, and even order directly from the website or app for delivery in some cases.

Much like many users check Just-Eat and Ubereats for local takeout food, many cannabis users now use Weedmaps to find and order cannabis locally. In addition to that, they can also check out the ratings of all kinds of strains, products, and brands to make informed buying choices.

Eaze has become one of the best apps when it comes to quick and easy cannabis delivery.

The company initially started out in 2014 as an app to help California medical marijuana patients get products delivered. Entrepreneur Keith McCarty founded the business and ran it out of a single apartment with four employees. It’s now known as the “Uber of Weed” and serves users in over a hundred cities in California and Oregon.

Eaze has also expanded to offer other services. For instance, EazeMD provides users with help and resources to get their medical marijuana cards. It allows physicians to consult with patients via online video chat. Eaze also runs Eaze Insights- a service that collects data from surveys to provide useful statistics on what cannabis consumers want.

It became one of the most innovative marijuana businesses by focusing on a niche and becoming a major company that fits the consumer’s needs. It’s now a must-have app for many marijuana users.

GreenRush has become the biggest online marketplace for marijuana. It allows users to find dispensaries and products near them for delivery via their website or app and order within minutes. It’s a lot like Eaze, only GreenRush caters to users in various US states including California, Nevada, Massachusetts, Maryland, New York, Pennsylvania, Illinois and more.

Both medical users and recreational users can find the products they need via GreenRush. Their easy-to-use interface makes it exceptionally simple to order marijuana legally for any purpose. Users are able to categorize products based on the category, type of strain, and even which payment methods each dispensary accepts.

As the cannabis industry grows, consumers are continuously looking for ways to make the whole process of finding and buying marijuana easier. GreenRush innovates the way users can find and order the products they need and makes the entire transaction as simple as possible.

MJ Freeway offers cloud-based seed-to-sale software for all kinds of marijuana businesses. As marijuana sales become more widespread, it isn’t just consumers who need innovative marijuana software. The growers, producers, and dispensaries all need new ways to make their business run smoother, and MJ Freeway provides them with the software to help.

Their software covers the entire process from harvest to sale. It was founded in 2010 by Jessica Billingsley to improve efficiency for marijuana businesses. It’s now used by businesses all across the United States and other parts of the world to improve their entire operation.

MJ Freeway helps businesses keep track of their growing operations, make sure their inventory is well-stocked, and even improve customer loyalty using an all-in-one system that covers all of the operations and logistics of growing and selling marijuana. It also provides companies with data insights to improve their business and maximize profits.

Flowhub is another innovative cannabis company that offers a state-of-the-art point of sale solution for marijuana stores and dispensaries. Businesses are better able to handle transactions, manage their inventory, and streamline their daily operations through Flowhub’s innovative platform.

Flowhub was founded in 2015, yet in just four years it has already become a top retail management solution for hundreds of dispensaries across the United States. It has received huge investments and is becoming more popular for businesses, so it’s likely to grow even more as time goes on.

With more and more stores and dispensaries cropping up throughout the nation, solutions to make things easier for both businesses and consumers are important. Flowhub provides one of the best platforms to manage transactions and inventory while also adhering to state laws, minimizing losses, and increasing sales. They even provide mobile solutions for businesses that operate on-the-go such as marijuana delivery services.

MOTA Cannabis Infused Products is a cannabis company founded in Vancouver Island known for its innovative cannabis products. It’s often known as MOTA Edibles due to its reputation for delivering high-quality cannabis gummies, chocolates, and other tasty cannabis-infused treats.

However, while they’re well-known for their edibles, MOTA also provides a range of other cannabis-infused products. The company now creates and sells cannabis tinctures, capsules, suppositories, extracts, and a lot more. They even create some of the most unique and niche cannabis products such as tincture for horses and massage oils infused with THC and CBD.

MassRoots started out in 2013 as a social media platform designed specifically for pot enthusiasts. Founders Isaac Dietrich and Tyler Knight decided they wanted to create a “Facebook for stoners” complete with the opportunity to discuss, share pictures, and provide information with a global network of other cannabis users.

Within weeks of launching on the app store, MassRoots gained thousands of users simply from word-of-mouth and other social media platforms. It soon became the biggest community for weed users and even became one of the fastest-growing social networks in 2014. It now caters to over a million users and provides all kinds of unique services for consumers and businesses.

One of the innovative features now offered through their platform is the MassRoots WeedPass. This allows weed buyers to gain rewards such as movie and concert tickets by buying from certain dispensaries. They also offer advertising for businesses and provide a map of local stores and dispensaries to connect weed users with sellers in their region.

Nowadays, Trulieve has locations across the state of Florida including Bonita Springs, Edgewater, Fort Lauderdale, Jacksonville, Miami, Orlando, and many more. It also has operations in California (as Leef Industries) and Connecticut (as The Healing Corner), as well as plans to expand to other states.

The company has become a major name in the industry despite recreational marijuana still being illegal in Florida. They provide a range of their own medical cannabis products including their own flower strains, vape pens, and concentrates. Florida is one of the states with the most marijuana sales, even beating some legal states, and Trulieve is one of the leaders in the Sunshine State’s cannabis industry.

Seedo is an all-inclusive home growing system that makes growing marijuana exceptionally easy for anyone. Many users are beginning to become interested in growing their own marijuana as it’s now legal in many parts of North America. However, while learning how to take a plant from seed to cultivation can be difficult, Seedo’s Seedolab system makes the entire process simple.

Seedo provides a fully-automated growing device that you can control via an app. In fact, all users need to do is plant the seed then let the growing device handle the rest. Users won’t lose out on anything here- it provides a high-quality hydroponic growing system, allowing you to achieve incredible yields while taking all of the guesswork out of it.

The device looks somewhat like a minifridge and has temperature and light control to ensure the best possible growing conditions. Users can now order the Seedo device from their website for $2400. While it might seem a bit steep for some, the ability to grow in your own home and come out with high-quality marijuana every time can be a godsend for many cannabis enthusiasts.

If you’re an entrepreneur with an idea of your own, there’s never been a better time to get involved in the industry. Plenty of resources are out there to help with starting your own cannabis business, and you can also find tailored services such as marketing for marijuana businesses.

Enter your URL below to get a free SEO analysis of your cannabusiness website.